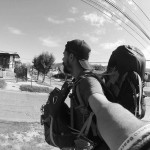 Music and travel are made to complete each other!

A special place and a special song often come together for us to create a fantastic memory.

I don’t know the name of that song. To be honest, I don’t want to!!! The Khmers music is awkward and attractive at the same time. Every time I listen to this sound, I think about my good friend Coco and all the crazy stuff we did together in Cambodia!!!

My favorite french canadian group. Simply the best you can found in Quebec! This song is all about travelling. A shooting star, that’s the best image of life! That’s exactly what I need when I miss home.

I’m not a big fan of Lord of the Rings (actually I never watch any… I know.)  But to of my best buds that I meet in New Zealand gave me goosebumps when we did the fantastic trek of the Tongariro Crossing!

Home of the Mordor, we were heading to the volcano in my van when the song I see fire began to play at the radio. The soundtrack of The Hobbit came from nowhere to add to the beautiful view of the sun rising behind the mountain.

Those two are special. I mean really special.

2015 was not an easy year for me until I made the best decision of my life : leaving for Africa. Why? Because life chose it. One night, I spin a globe, blinded, and I put my finger somewhere. This somewhere was South Africa!

On my way I was listening to those two songs that got the same message : live your life. Now!

There’s no lyrics to this song. Don’t need it. The music, the sound, that’s all I wanted. During 2017, I travelled throw 12 countries, hundred of places. But this song was the one that will stick with this trip forever.

Share on FacebookShare on TwitterShare on Linked InShare by Email

Caption of the world!